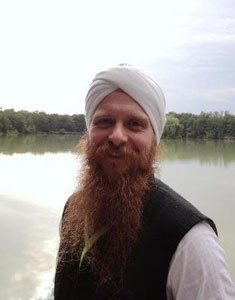 After many years on the spiritual path he found the truth he had been seeking through his teacher Shiv Charan Singh and teachings of Yogi Bhajan. He now lives to serve others on their journey. Angad has recently returned to the UK after 4 years serving as Director of Château Anand, 3HO Europe’s Ashram and Kundalini Yoga Centre, in France.

He teaches across the UK and Europe. He also serves as an advisor to KYTA UK & as a Director of 3HO International.

After the indoctrination of my school education my personal journey of discovery started with a degree in Biological Sciences at the University of Oxford. However, the more I came to know of the phenomenal world the less I felt I understood about how it really worked.

After this I became interested in human psychology and how we perceive the phenomenal world and why we do the things we do. This led to me working in the corporate world as a brand strategist, creativity consultant, market researcher and social trend expert. After a few years in this world my personal ethics took over from financial desires and I left the corporate world to share my understanding in a more appropriate environment. I successfully set up and managed Spiral Insight Ltd. a social psychology and ethical business consultancy and worked alongside Demos as an associate. In 2008 I published ‘State of Trust‘ a book exploring trust and relationships between local government and the population.

At the same time I continued my investigations into the nature of reality and humanity studying the philosophy of the Wu Xing (Chinese 5 elements) and training in Shiatsu at Ki Kai School in North London. Working with shiatsu I became interested in shifting psychological patterns through touch and body work and furthered my studies with a postgraduate course in ‘Movement Shiatsu’ with Bill Palmer and the School for Experiental Education and ‘Seiki’ with Akinobu Kishi.

Following a spontaneous Kundalini Rising in 2002 I became a ‘seeker’ of truth and over the following 5 years I pursued varying paths of discovery with a series of teachers (Buddhism, Taoism, Shinto, Sufism) and explored various spiritual practices before finally discovering Kundalini Yoga.

On discovering Kundalini Yoga in 2007 I found the path I had been seeking and pursued Teacher Training. Following and year in India I returned to Europe where I met my spiritual teacher Shiv Charan Singh and fully committed to this lineage and path.

I was introduced to Kundalini Yoga when I was 13 years old when my father took me to the European Yoga Festival in France. Since this introduction Kundalini Yoga has become a very important part of my life. At the age of 17 I went to the Miri Piri Academy, a school founded by Yogi Bhajan in India. There I trained as a Kundalini Yoga Teacher and lived the yogic lifestyle on a day-to-day basis. Following this experience I have kept up my Kundalini Yoga practice and teaching.

My other main interest and passion is massage and healing. I have done many workshops and experienced many different massage techniques including Ayurvedic Massage and Thai Yoga Massage as well as Massage using Sat Nam Rasayan and Reiki to intensify the relaxation and healing effects of the massage.

To further integrate the mind into healing sessions and to increase my abilities in counselling I attended workshops in Nonviolent Communication as taught by Marshall Rosenberg and have been practising it since 2007 in my daily life and my relationship.

Another concept that helps me to see through the mind’s games is “the work” of Byron Katie. A power process to grasp unconscious beliefs and find a way of regaining the power in our lives.